ANNUAL REPORT 2017 Mission of the Council

To serve, represent, unite, defend and protect Jewish interests and provide opportunity for collaboration and co-ordinated action in Greater Manchester and Region.

Aims of the Council:

It has again been an exceptional year for the Jewish Representative Council with so many people involved across our working groups, which are now the bedrock of our work.

I was recently asked by a friend to describe the work of the Representative Council. As I progressed through our achievements, she was taken aback by the breadth of what we do. I had not even got half way to telling her the full story! Whether it be addressing education, health, young people, the elderly, antisemitism, interfaith relations, community safety, policing, shechitah or a myriad of other issues, the Council is here to respond on behalf of our community. More and more, we are forward planning as we become the proactive organisation that is needed to lead our community. The fact that we continue to carry out this work wholly with volunteers, with some administrative and finance support, is a source of both amazement and admiration.

During 2017, over 50 individuals gave their time to help us in our work. Many represented us to Local Authorities or NHS Trusts; on police bodies, SACREs and interfaith groups; to the Board of Deputies and partner organisations and at civic occasions. Other helped run events such as our first ever Variety Show and first Arts Festival, Yom HaShoah, our Councillors’ Seminar, Annual Community Challenge Quiz, the Big Neighbourhood Bash, Collabor8, Lectures and Hustings. Yet more helped update our website, produce RepPresents, sell raffle tickets, collate our Year Book and so much more.

To all who have volunteered and supported us throughout the year, our thanks. To the wider community, we invite you to get involved in our work, attend our events and support our continued developments.

Board of Deputies at Heathlands Village. The event was attended by 25 Councillors from across the North West and introduced them to the Jewish community with sessions on antisemitism, Israel, social care and education. Participants were also addressed by Sir Howard Bernstein and Ivan Lewis,MP.

Worked with the Board of Deputies and Churches Together on a major initiative, Invest in Peace, involving conversations between bereaved Palestinian and Israeli parents, promoting peace and reconciliation. This resulted in an event in November at Stenecourt Shul with two bereaved parents, which was hugely appreciated by the

Outside of our Working Group structure, we convene the Manchester Jewish Care Forum, bringing those organisations involved in social and health care in the community together twice a year to discuss issues of common interest. Our two meetings this year enabled organisations to touch base, share some of the challenges they face and input into the Memorandum of Understanding being developed between the Greater Manchester Health & Social Care Partnership and the Faith Sector.

In just over a week it will be a year since the Manchester Arena terror attack, which claimed 22 lives. One week after the attack, our Council organised a special tehillim service that brought together over 400 Jews from all sectors of the community at the Holy Law Synagogue with the Chief Rabbi, local rabbonim and dignitaries. My particular thanks to Rabbi Benjy Simmonds for his help with this and to all those who responded so quickly.

There are so many other pieces of work, visits, events and other activities we get involved with, it is a daunting but incredibly rewarding undertaking remit that we take on. We continue to respond to numerous queries on diverse issues related to the community, from requests to undertake research; invitations for representation at forums, meetings and networks; how to provide kosher food; requests to volunteer and much more. Our thanks go to our Administrator, Laurie Burnley-Myers, who is our first contact for these queries as well as supporting our increasing workload.

Many thanks also to:

Marc Levy, North West Manager for the JLC, for his support for so many of our initiatives as well as the amazing success he has had, which complements our work;

Kate Lurie for her work on minute taking;

Our Past Presidents, Linda Jacobs and Joy Wolfe for all their support.

Our Officers, Jay, Jeremy, Susan, Clive, Jacky and Michael, and their teams, including all our Executive members and volunteers, for all their efforts that have produced such amazing achievements;

Sharon Bannister, our President, who has led this Council with great dignity and brings us great respect.

My apologies for any of our activities I have missed out and to anyone I have failed to thank. As we continue to grow, I hope that this is one task that will become ever more onerous for my successor. 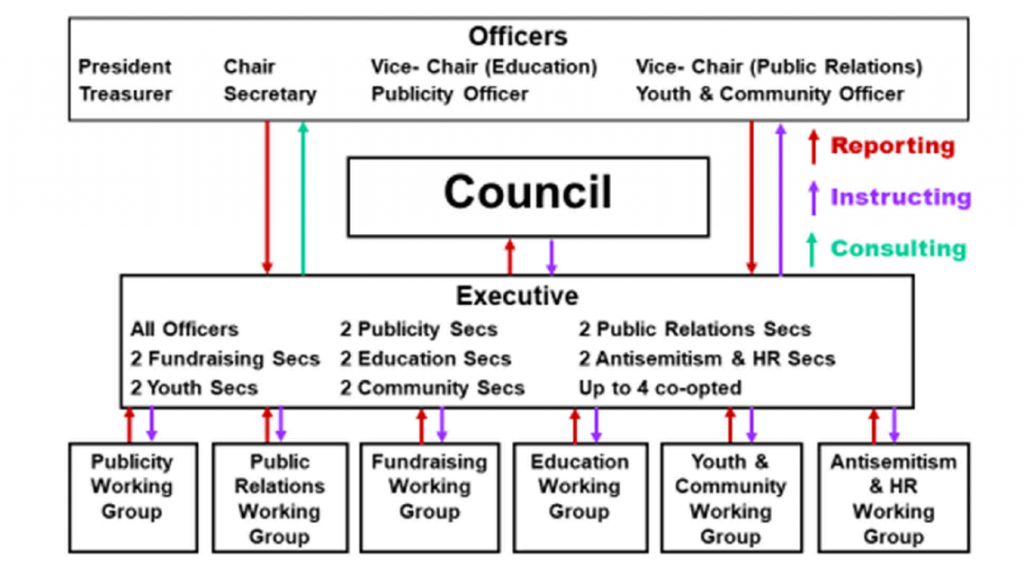 The Council employs a part-time Administrator who is line managed by the Chair of Executive.

The JRC Annual Report for 2017 can be downloaded in pdf file format by clicking the link below.