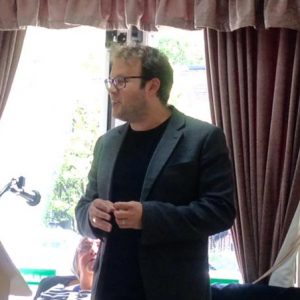 Daniel Berke chair of the Zionist Central Council (ZCC) was the guest speaker today at the monthly meeting of the Jewish Representative Council of Manchester and Region (JRC).

Daniel Berke newly installed chair of the ZCC spoke about the ZCC vision, its past history , numerous achievements and its future direction at today’s meeting.
Prior to Daniel’s speech, Sharon Bannister, JRC chair, made a statement on current Representative Council activities and gave communal updates, Susan Isaacs (JRC fund raising Executive) launched the raffle tickets sale for the big annual quiz to be drawn in February 2017 – booklets can be obtained from the office via this page or email [email protected]

Daniel Berke gave a brief overview of the illustrious history of the ZCC and its instrumental role in the Zionist movements both locally and worldwide.

He further touched on the latest developments within the organisation since the 2014 events in Israel and gave an insight into the work of the new ZCC team, as well as all the seminars, training and general advocacy which the ZCC undertakes effectively to promote a positive image of Israel as well as defend its good name when necessary.

Daniel emphasised the importance of inter-communal collaboration in order to achieve our joint aims.

Robert Festenstein vice chair at the ZCC was our second guest speaker of the day; he highlighted the work of the Jewish Human Rights Watch that he co-chairs. He spoke about current and previous cases that the organisation took on such as the case of “War on Want” over their antisemitic stance and that of Leicester County Council over its support for BDS. The conclusion drawn was that this is still work in progress as the law is not clear in this area and legislation has been stalled due to parliament’s preoccupation with elections.

Q&As at the end of the session addressed wide ranging communal issues and Jonny Wineberg introduced an emergency motion in relation to the Chakrabati enquiry which was unanimously adopted by delegates, the meeting ended with a vote of thanks for the guest speakers.

2. This Council believes that, whilst not a whitewash, the report fails to go far enough in
addressing the causes of antisemitic discourse in the Labour Party and recommending
stronger solutions.

3. This Council instructs its relevant Officers to send a response to the report to include
these beliefs and suggest that the Labour Party:

4. This Council is extremely disturbed by Jeremy Corbyn the Leader of the Labour Party’s
comments at the launch of the Chakrabarti enquiry where he said: “Our Jewish friends
are no more responsible for the actions of Israel or the Netanyahu government than our
Muslim friends are for those of various self-styled Islamic states or organisations.”

5. That this epithet, whether intended as a comparison or not, was extremely insensitive
and Mr Corbyn should heed the words of the report when it says, “Suffice to say that
insensitive and incendiary language, metaphor and comparison is of no help to
constructive debate, in general, and discourse around the future of Israel-Palestine, in
particular.”

6. This Council is appalled at the verbal attack on Ruth Smeeth MP, one of our delegates,
at the launch of the report, which was is immediately at odds with the words of the
report, “encouraging a civility of discourse which is respectful of each other’s diversity
and sensitivities.”

7. This Council is also dismayed by the failure of the Leader of the Labour Party to
intervene or speak out in Ms Smeeth’s defence.

8.    This Council is also concerned by the refusal of Jeremy Corbyn to acknowledge or respond to the invitation from Isaac Herzog, the leader of Israel’s Labour Party, to visit Israel and Yad Vashem. We would hope that, to show Labour’s continuing support for progressive Zionist ideals, he will take up this invitation as soon as practicable and that opportunities for future such meetings will be responded to positively.

9.    This Council instructs the President to write to Mr Corbyn expressing our view.