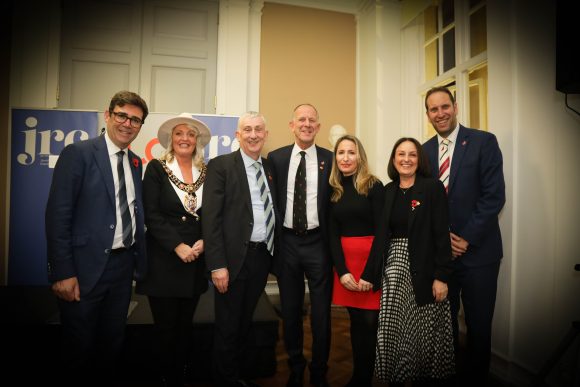 The Lord Mayor of Manchester, Cllr Donna Ludford hosted a Civic Reception for the Jewish community at her Parlour in Manchester Central Library.  The event was jointly organised by the Jewish Representative Council of Greater Manchester & Region and the Jewish Leadership Council.

The Lord Mayor and communal leaders were joined by the Speaker of the House of Commons, Sir Lindsay Hoyle MP, Metro Mayor, Andy Burnham, Police & Crime Commissioner, Baroness Beverley Hughes, MPs from across the House of Commons, Council Leaders, Religious and Civic Leaders and Ceremonial Mayors.

In addition to the Speaker, attendees were addressed by the Lord Mayor and the JRC Chair – former High Sheriff – Mark Adlestone OBE DL and also Co-Chief Executive of the JLC, Claudia Mendoza.  The work of the Jewish community and success of their organisations was referenced.  Those addressing the gathering discussed how the community is vibrant, 0utward facing and contributes a huge amount to wider society.  Those speaking from the community stated how much they appreciated the strong connections with government.

The Civic Reception took place on the anniversary of Kristallnacht and this important historical event was referenced by those speaking.  It was noted how fortunate the Jewish community are to have established relationships with elected representatives who are determined to combat antisemitic hate crime.”

“It has been a pleasure to work alongside the Lord Mayor and her team to arrange a wonderful event to celebrate the Jewish community.  We have enjoyed a fantastic relationship with the Lord Mayor during her term in office.  I was delighted to reference this in my speech and it was also reflected by the warmth of her remarks.

We are proud of how the Jewish community integrates and it is always a pleasure to be able to showcase our successes.  It was a tremendous honour that the reception was addressed by the Speaker of the House of Commo9ns.  His words were powerful and pertinent and we are grateful for his thoughts and insight.  I would like to also thank those representatives from local and national government who have done so much for our community.  The fact so many joined us at the reception is a testament to their support.

“The JLC is proud to work alongside the Greater Manchester community to highlight their work.  The reception has clearly demonstrated that the Jewish community in Greater Manchester is thriving and the JRC under the stellar leadership of Mark Adlestone and Marc Levy is partly to thank.  We are grateful to the Speaker, MPs, and all the other dignitaries for joining us at this important event.”

It is so important that we join together in events like these to pause for thought, to reflect and remember the atrocities that have brought us to this point – and I am so grateful to the Jewish community for inviting me to speak.

I am conscious that the number of survivors with first-hand testimony continues to dwindle – it therefore falls upon us all to keep their memory alive.  It is why in Parliament I introduced the tradition of commemorating Holocaust Memorial Day, to recognise the experiences of colleagues, friends and constituents, past and present.

They are our friends and our family.  They live among us and it is thanks to their brave testimony that we learn the lessons of the past: that genocide is a steady process that begins if discrimination, racism and hatred are not checked or prevented.”