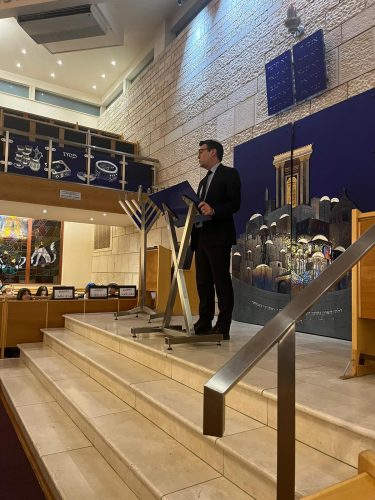 We were thrilled to welcome over 200 people to Hale Shule on Thursday night to greet the Metro Mayor for Greater Manchester, Andy Burnham, who was able to attend our Chanukah Lighting Event.

The event was put on in conjunction with the Jewish Representative Council of Greater Manchester (JRC), Board of Deputies of British Jews (BOD), the Jewish Leadership Council (JLC) and Hale Synagogue.

We were honoured to have Andy Burnham address the Community and light the Menorah in Shule and Mr Burnham spoke really warmly about his ongoing relationship working with the various Manchester Jewish organisations.

The event was compered by Mark Adlestone OBE DL – Chair – Jewish Representative Council of Greater Manchester & Region and a member of Hale Shule, who introduced the speakers.

When he introduced Andy Burnham, Mark Adlestone spoke of the warm relationship between the Metro Mayor and the Greater Manchester Jewish Community and stressed how much we appreciate all his efforts to help and support the Jewish Community.

Rabbi Yisroel Binstock led the lighting of the Menorah in Shule, following a brief explanation about the Festival of Chanukah and its relevance today.

We were then entertained by a delightful medley of Chanukah songs, sung by the North Cheshire Jewish Primary School’s choir, under the tuition of Amanda Becker and Rabbi Katz, accompanied by Rabbi Binstock on guitar.

After the Chanukah lighting event, we adjourned to the Pearl Suite where we dined on delicious Shawarma,  houmous, latkes, salad and doughnuts and mulled wine – all beautifully prepared and catered by the Hale Shule Ladies Catering Committee.