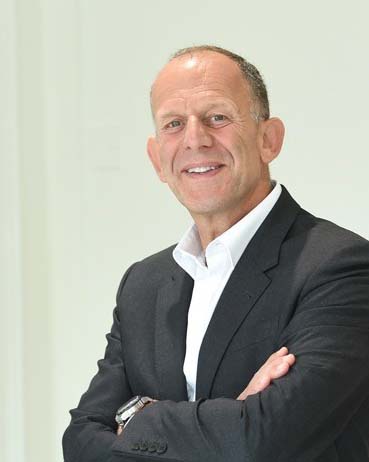 Mark Adlestone OBE DL became Chair of the JRC in May 2021.

Mark is third generation of this family business.

Mark has won the ‘Leadership Award’ on seven separate occasions.

In 2020, Beaverbrooks was granted the ‘Giving Something Back’ Special Award.

In the UK Jewellery Awards Beaverbrooks has been awarded ‘Employer of the Year’ nine times in the last 10 years.

Beaverbrooks is particularly proud of its very special culture that encourages its colleagues to communicate in an open and honest way. The company has a strong emphasis on charity and community and donates 20% of its of its retained profit annually through the Beaverbrooks Charitable Trust.

Since the year 2000, the Beaverbrooks Charitable Trust has donated more than £20 million to over 1000 charities.

Mark is Chair of the Beaverbrooks Charitable Trust.

Beaverbrooks is very keen to expose all of its colleagues to the concept of charitable involvement and volunteering and therefore gives each persona a minimum of two days per year of paid time to work for a charity of their choice.

Mark oversaw the merger of The Fed (Jewish Social Care in Greater Manchester) and Heathlands Village (Residential Care Home in Prestwich, Manchester).  He became Chairman of the newly formed entity now known as The Fed in November 2009.  He remained as Chair until November 2018.  He remained a Trustee of The Fed until January 2021 when he was appointed a Patron.

He was Governor of Withington Girls’ School between 2014 and 2020.  In 2020 the School was awarded the Sunday Times ‘North West Independent School of the Decade’.

In October 2015 Mark was presented with the OBE by HM The Queen at Buckingham Palace for ‘Services to Business and Charity in the North of England’.

He has been a Trustee of the Jewish Leadership Council since 2017.

Mark is an Honorary Member of the National Association of Jewellers.

In March 2017 Mark was appointed as a Deputy-Lieutenant of Greater Manchester.

In July 2017, at the UK Jewellery Awards Dinner Mark was presented with the award for ‘Outstanding Contribution to the Industry’.

In July 2019, Mark was declared a ‘Freeman of the Mystery of Goldsmiths of the City of London’.

In September 2019, Mark was declared a ‘Freeman of the City of London’.

In July 2020, he became a Patron of the African and Caribbean Mental Health Services.

In October 2020, Mark became an Ambassador for Triple C – Disability within the Arts.

In January 2021, Mark became an Ambassador for Migdal Emunah – an organisation offering guidance, support and advocacy for sufferers of sexual abuse within the Jewish community.

In May 2021, Mark became Chairman of the JRC (Jewish Representative Council of Greater Manchester & Region).

Hobbies & Interests: include sport, music and theatre.  He plays racket ball, enjoys running, swimming and the gym.  Mark loves watching sport and in particular his beloved Blackpool FC.  Mark is also a big collecttor of music and has over 2,600 albums and more than 450 vinyl singles.  He enjoys live concerts and theatre.