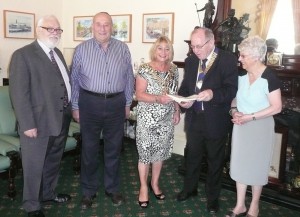 The President Frank Baigel presenting the Mayor of Tameside, Cllr Brenda Warrington,
with a copy of the Council’s Manchester  Jewish Year Book, a book called “What  do Jews Believe”, and a book about Israel     during his recent courtesy visit  on Tuesday 24th July to Ashton Town Hall –  the tenth such visit to mayors in the Greater Manchester area since 12 June.

They discussed matters of mutual concern including Health Services in the UK and in Israel, extremism and Trades Union attitudes towards Israel.

The President was accompanied by, from left to right, Rabbi Tony Walker,  Executive member, Louis Rapaport, past President and Filis Rosenberg, Hon Sec.